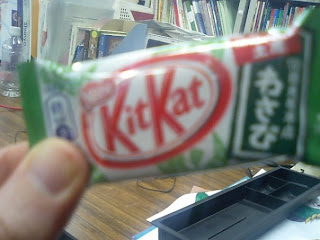 Here's the little bugger that started it all off. Excuse the photos from my old phone, I wasn't planning on embarking on this 'endeavour' at the time.

'Would you like a Wasabi Kit Kat?' a colleague asked me one day.

'What?' I replied, but there it was. In all it's greeny goodness.

Why, where, who? are reasonable responses to this chocolate freak but it exists so best deal with 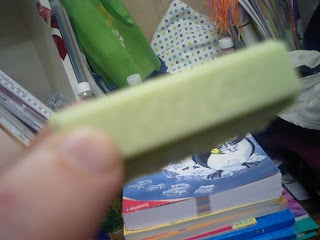 So what's it like? Well, it starts off like a Kit Kat but then you get a little after kick of Wasabi.

I'd like to report it's not unpleasant. But it is. A Kit Kat is after all, not a sumptious slice of sashimi.

It's a chocolate covered wafer bar.

Still it got more positive reviews from others. Another colleague said of it '何かフレッシュなかんじ' Which means it has a kind of fresh taste to it. Zesty I suppose. And here's a video of my brother reviewing it, until he has an Adebayor moment.